"In most modern drawing rooms confusion is the first thing that strikes one. Nowhere is there breadth, dignity, repose or true richness of effect, but a symbolism of money alone. Hoarding pretty things together is more often a sign of vanity and vain-glory than good taste. Let us begin by discarding the mass of useless ornaments and banishing the millinery that degrades our furniture and fittings. Reduce the vanity of patterns and colours in a room. Eschew all imitations and have each thing the best of its sort, so that the decorative value of each will stand forth with increased power and charm."

These are Voysey’s words of warning to readers of The Studio in 1893, and are indicative of his wish to design "from the inside outwards", and his quest for "sincerity and moral integrity". His influence on domestic interiors is perhaps twofold. Many of his commissioned houses are devoid of the richly patterned and nature-inspired fabrics and wallpapers for which he also became renowned. However his work on wallpapers for Sanderson, Essex and Co., his hardware for Thomas Elsley and Co., and his exquisite unwaxed furniture exemplify the importance he placed on spiritual value and craft tradition. Voysey condemned the metalwork on the furniture of other designers: "depraved coarseness, brutality and sickly elaboration characterised the metalwork on nearly all modern furniture".

Arguably the most explicit example of the integration of nature and colour within his interiors occurred at his own house, The Orchard. "Nature feasts us with delicate greens, greys, blues, purples." Red was used in nature "most sparingly". The hall at The Orchard contained simple unstained, unpolished furniture, purple silk wallpaper, turkey red curtains, a rug of muted blue-green and carefully selected ornaments, including his much published, highly decorated, painted mantle clock.

Voysey resented attempts to characterise his work. The fact that in his later career he increasingly concentrated on his furniture and decorative fabrics and papers is probably the result of his lack of commissions for new houses after 1911. This output, light, organic and beautiful, seems all the more extraordinary in the context of his sombre and uncompromising character.

In 1892, The Studio praised Voysey’s furniture: "No reliance on mouldings, or machine carvings, ormolu mountings or other stuck-on decorations, but all the same in hinges, escutcheons, and other portions where ornament can be used wisely, he does not shun it, but rather welcomes and amplifies it so that these few portions impact the effect of sumptuous adornment to the whole of the structure that else relies solely on good material, shaped to fine proportion."

The high corner posts and flat caps seen in much of his furniture and joinery were derivative of the work of A.H. Mackmurdo and others, despite Voysey’s wish to differentiate his work from "Aestheticism". 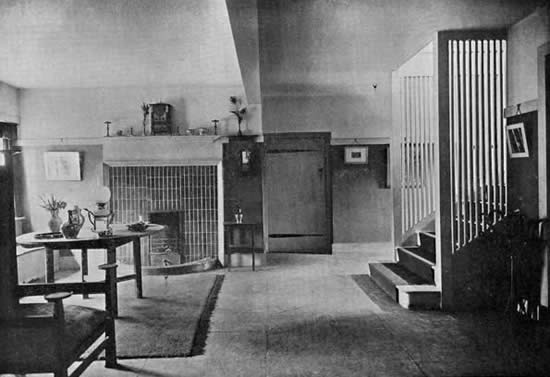 Photograph of the hall in Voysey's own house, The Orchard at Chorleywood (1899).